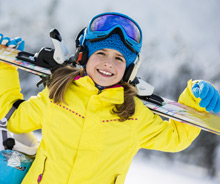 The Grandvalira ski resort is a vast domain occupying much of the northeastern territory of Andorra. It encompasses six different local sectors, these being Soldeu, El Tarter, Pas de la Casa, Grau Roig, Canillo and Encamp, which are all marked on the Grandvalira piste map. Since the 2003-04 season all six sectors have been linked together by an extensive lift system, which allows visitors the opportunity to experience a huge choice of skiing and snowboarding across the Grandvalira ski resort easily, and all under one lift pass.

With 210km of marked pistes on offer, the variety of terrain is wide and interesting, making Grandvalira an excellent choice for both skiers & snowboarders of any ability. Each sector features its own ski and snowboard school, for more information about Soldeu ski school, visit our ski school information page here, where you can get full details of the tuition on offer and book group lessons.

"It's bigger than most people realise. Skiing from Soldeu to Pas de la Casa and back is a favourite pastime" Richard Mckenna, Windlesham, UK

The Grandvalira ski resort lift pass will give you full access to all 67 ski lifts which serve 123 runs, plus specialist beginner areas and snowparks. All lift passes here are “hands-free” meaning you never need to take it out of your pocket.

A total investment of over €1 billion has been spent by Grandvalira in recent years, offering improved ski lift capacity, new facilities and increased snow cannon coverage (now at 65% of the full ski area), providing the area with a strong reputation for reliability of snow. In addition to the 210km of pisted runs, there are also several freeride areas and freestyle parks, you will even find night skiing available in the Grandvalira - Pas de la Casa sector.

The huge investment and improvements have attracted many world-class competitions to Grandvalira, Andorra, showcasing the ski area well and truly on the world stage. The most notable competitions hosted in the Soldeu / El Tarter sectors recently include the Women’s Alpine Skiing World Cup which takes place in February, and the much-anticipated Total Masters of Freestyle events which are hosted towards the end of the season in March / April. There are several other top-level winter sports competitions taking place each year across Grandvalira.

For those of you visiting the mountains for the first time, you might find our 'What to Wear' guide useful to get an idea of which things you should pack!

The largest freestyle park in Grandvalira is found in the El Tarter sector, and is an excellent place to hit kickers, rails, boxes and more! There are often some pretty exciting (big!) kickers in the El Tarter snow park. If you’re not the type to throw yourself in, then it can be equally as exciting to just go and watch as the freestyle enthusiasts try out their new tricks and jumps. There is also a chairlift which runs alongside the park offering great views of the action.

The second snow park in the Grandvalira ski area is Snowpark Xavi which can be found in the Grau Roig sector, aimed at beginner to intermediate levels and great for those getting started in the world of freestyle.

Located just outside Soldeu in the Bordes d’Envalira area you will find Sunset Park Peretol, which is the only night time snowpark located within the Pyrenees. Open from 3pm to 9pm Tuesday to Sunday this floodlit freestyle park has an exciting mix of boxes, rails, kickers and a special “street area” plus ski lift. Generally aimed at intermediate level upwards, the park is very popular with local freestyle fans that enjoy showing off their biggest and best tricks! You can access Sunset Park Peretol with your Grandvalira lift pass, however, it is not directly connected to the slopes and access is usually by car.

Keep up to date with the latest news, offers and upcoming events!